The Uncoded Chronicle Of Tutankhamun 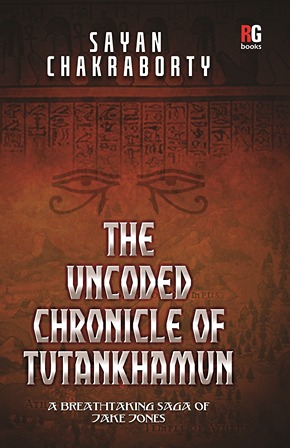 The Uncoded Chronicle Of Tutankhamun

Dr. Anil goon was brutally murdered when Dr. Bennet recovered from a coma. But the mysterious codes were not decoded. The Egyptian procedure of deathlessness, of Tutankhamun’s era in 1342 BC, was hidden from the world. But what was lost, will be found. Ibrahim kaskar, a heinous terrorist, who planned to acquire the three invaluable diaries which held the key to immortality. Kaskar’s plan included to set free Abu Salem for further terrorism. Jake Jones had to accept the challenge when he realized that was the only option left for him. In this breathless saga Jake must destroy the master mind and recover the chronicle of Tutankhamun.

Sayan Chakraborty is the author of ‘Your Logical Sieve and You’, one of the most widely read self-help book. The author was involved in different assignments that have taken him all around the country. He was born in Howrah district of West Bengal and brought up in Kolkata. He likes playing chess and cricket and is a sports lover. Find Sayan Chakraborty here - www.facebook.com/sayan.chakraborty13.