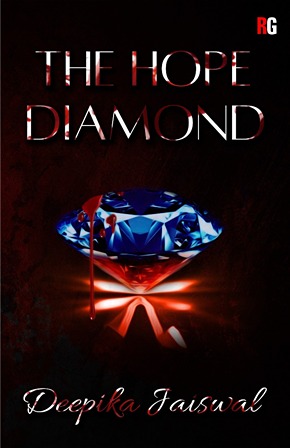 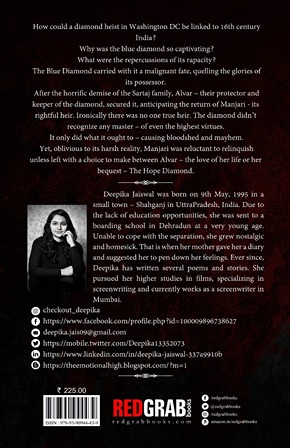 What should have been an uneventful research trip to Washington, D.C. turns into a nightmare for Dr Mitali Verma – member of the Indian Council of Historical Research – when she finds herself arrested and accused of stealing the Hope Diamond. Shockingly, not only does Dr Verma confess to her role in the crime, but she also lays claim to the diamond, calling it her personal possession. During her subsequent interrogation, she narrates the history of the diamond: a sordid tale that would conclusively prove the sole owner of the priceless jewel to be her, and her alone.
Plunging into the opulence of sixteenth century India, Dr Verma’s history recounts a tragic and passionate love story. Alvar – the loyal praetorian guard of the affluent Sartaj family, comes into the possession of the Blue Diamond after the Sartaj family’s horrific and suspicious demise. Protecting the stone for its rightful heir, Alvar holds out hope for the return of Manjari: the only Sartaj family member whose remains were unfound. She was the true owner of the diamond, the only person who could lay claim to its beauty and the hope it embodied. Unbeknownst to all of them, however, was the true nature of the Blue Diamond; it was no mere bauble. It was a curse come to life, waiting to destroy all who possess it.
A series of increasingly horrifying events are set in motion, each resulting in several deaths, and culminating in the final loss of the diamond when a French traveler steals it away from them all, taking the Blue Diamond westward.
By the end of the wretched tale Manjari thrown into a dilemma and torn between picking the Blue Diamond and the love of her life, she runs away into the night. She disappears once again, choosing to go after the stone and leaving behind a trail of misery in her wake.
Back in the present day, with the whole of Washington, D.C. thrown into a frenzy over the Blue Diamond’s whereabouts, will Dr Verma’s story reveal to the authorities where the peerless jewel now lies? Or does some other desolate fate await the good doctor and her beloved diamond?

Deepika Jaiswal was born on 9th May, 1995 in a small town – Shahganj in UttraPradesh, India. Due to the lack of education opportunities, she was sent to a boarding school in Dehradun at a very young age. Unable to cope with the separation, she grew nostalgic and homesick. That is when her mother gave her a diary and suggested her to pen down her feelings. Ever since, Deepika has written several poems and stories. She pursued her higher studies in films, specializing in screenwriting and currently works as a screenwriter in Mumbai.

Be the first to review “The Hope Diamond” Cancel reply