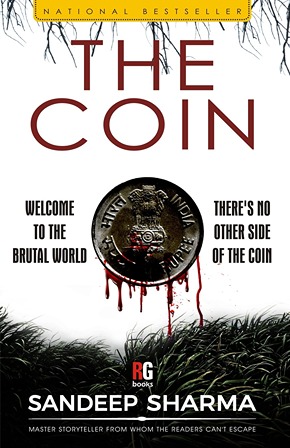 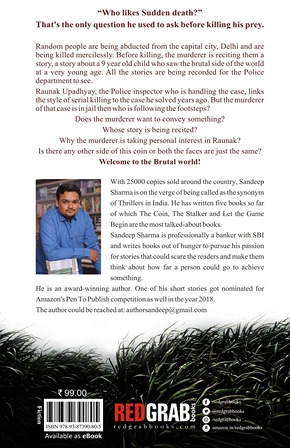 “Who likes sudden death?” that’s the only question he used to ask before killing his prey. Random people are being abducted from the capital city, Delhi and are being killed mercilessly. Before killing, the murderer is reciting them a story, a story about a 9 year old child who saw the brutal side of the world at a very young age. All the stories are being recorded for the police Department to see. Raunak Upadhyay, the police Inspector who is handling the case, links the style of serial killing to the case he solved years ago. But the murderer of that case is in jail then who is following the footsteps? Does the murderer want to convey something? Whose story is being recited? Why the murderer is taking personal interest in Raunak? Is there any other side of this Coin or both the faces are just the same? Welcome to the brutal world!

Sandeep Sharma, the bestselling author of 5 books including the most talked-about titles The Coin and The Stalker, has become the author to look forward when it comes to thrillers in India. Sandeep Sharma is professionally a banker with SBI and writes books out of hunger to pursue his passion for stories that haunts as well as force the readers to think about how far a person could go to achieve something. He is an award-winning author. One of his short stories got nominated for Amazon’s Pen To Publish competition as well in the year 2018.

Be the first to review “The Coin” Cancel reply