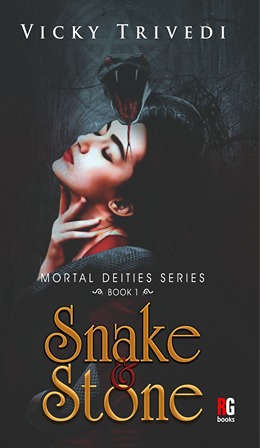 In Dwapara Yuga, the third among Pandava, Arjuna fell in love with Ichchadhari Nagin Ulupi. Can the same happen in modern times?
What if you fall in love with Ichchadhari Nag?
Nayana Mevada meets Kapil in the college and soon finds he is the boy who happened to have a snake in her reoccurring dreams. She falls in love with him and knows they had already lived life together or maybe many lives.
Soon she is dragged into an ancient battle between the Madari tribes and the Ichchadhari Nagas who live hiding among humans.
Nayana must find Answers. Who is she? And how is she connected with the ancient battle?
She sets out to get answers but before it, she realizes that there is a larger scheme at play and an ancient curse is playing its part.
What if Nayana isn’t a girl but one from Nagloka?
Can they break the curse together?
Snake & Stone is a thrilling story about forbidden love intertwined with Hindu mythology.

Be the first to review “Snake & Stone” Cancel reply