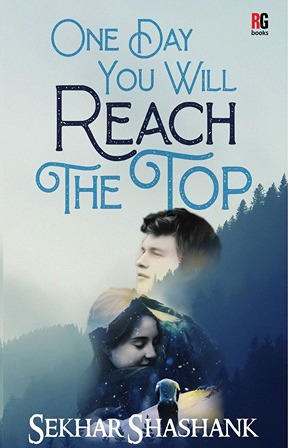 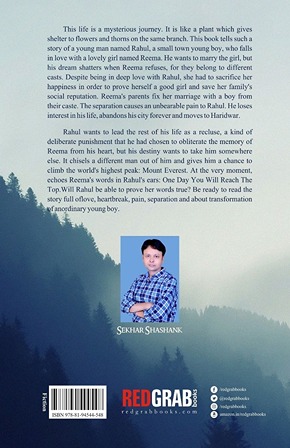 This life is a mysterious journey. It is like a Plant which gives shelter to flowers and thorns on the same branch. This book tells such a story of a young man named Rahul, a small town young boy, who falls in love with a lovely girl named Reema. He wants to marry the girl, but his dream shatters when Reema refuses, for they belong to different casts. Despite being in deep love with Rahul, she had to sacrifice her happiness in order to prove herself a good girl and save her family social reputation. Reema’s parents fix her marriage with a boy from their caste. The separation causes an unbearable pain to Raoul. He loses interest in his life, abandons his city forever and moves to hardware. Rahul wants to lead the rest of his life as a recluse, a kind of deliberate punishment that he had chosen to obliterate the memory of Reema from his heart, but his destiny wants to take him somewhere else. It chisels a different man out of him and gives him a chance to climb the world’s highest peak: Mount Everest. At the very moment, echoes reema’s words in Rahul’s ears: one day you will reach the top. Will Rahul be able to prove her words true? Be ready to read the story full of love, heartbreak, pain, separation and about transformation of an ordinary young boy.

SekharShashank is a journalist. He has worked with many leading Indian newspapers, including DainikBhaskar, Rajasthan Patrika, People news, Naiduniaetc,. There, he shouldered different responsibilities. He was born in Satna and brought up in Gwalior, the city famous for Music Maestro MiyaTansen and his Guru Mohammad Gaus. He is currently based in Noida and working with a MNC as content moderator. Writing has always charmed him. During his journalism studies, he began to write stories that received appreciation from his teachers and other established writers which motivated him to take the writing seriously. Apart from interviewing many national and international figures as a journalist, he also penned few stories which were published by literary magazines. His first novel Dark Poem came out in 2018.