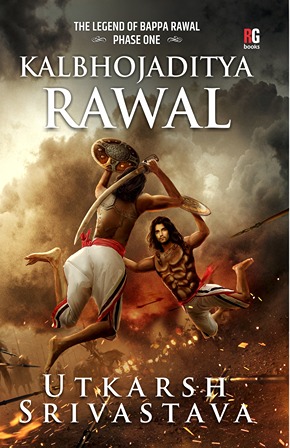 Slaying down two of the finest Arabian warlords on the battlefield of Brahmanabad, Kalbhoj was celebrated around as the valorous one. And the glory of that disciple of Maharishi Harit and a great devotee of Lord Shiva reached Bagdad, the capital of Iraq. After the triumph in the war, Sindhuraj Rai Dahirsen sent a warning letter to Sultan Alhajaj and Caliph Al Walid Bin Abdul Malik of Iraq to take back all the Arabian troops camped around the whole of Sindh.
To avenge this humiliation and conquer Sindh, Sultan Alhajaj Bin Yusuf chose one of his finest warlords Hakim Muhammad Bin Qasim Al Sakifi.
After the fierce battle of Brahamnabad, when Kalbhoj returned to his homeland Nagda, the images he saw in the Sabarmati river unveiled his wounds of the past. Meeting his own kin after years flashed so many questions in his mind. Those faces which seemed friendly were now looking like deceiving ones. The darkness of untruth and doubts was overwhelming all his ambitions, and the path ahead was not making sense at all.
On the other hand, Muhammad Bin Qasim sent his two hundred convoys to be dispersed in the whole of the Hind, disguised as merchants, enslaved people, and smiths to learn and adapt the culture of Hind to be deceiving enough to execute his plan to conquer Sindh.
While in Nagda, when Kalbhoj was made aware of his unwilled truth, he felt like living a delusive life all these years of being on the righteous side. But now he had a sense of clarity in his mind about the path he had to choose with his sword.

Utkarsh Srivastava is a marine engineering graduate from the DMET Kolkata campus. He started his writing career as the author of Rankshetram, translated 30+Hollywood series and shows into Hindi (majorly Netflix and prime), working with story circus (almost three years). It all began when he read ‘Mrityunjay’ by Shivaji Sawant. And that was the beginning of his fascination with mythological and historical characters, which led him to be where he is now.
And this fascination is still going on with a new story after Rankshetram. The tale of one of the forgotten legends, the disciple of Harith Rishi of Ikshavaku vansh, a descendent of Lord Rama, a great King who once united the army of Hind against the foreign threat. Maharana Kalbhojaditya Rawal aka Bappa Rawal.

Be the first to review “kalbhojaditya Rawal” Cancel reply