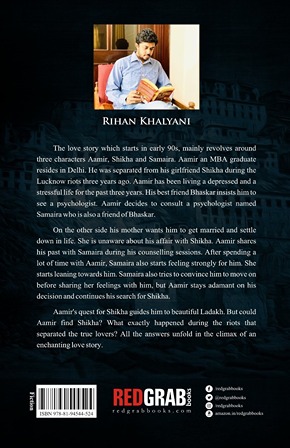 The love story which starts in early 90s, mainly revolves around three characters Aamir, Shikha and Samaira. Aamir an MBA graduate resides in Delhi. He was separated from his girlfriend Shikha during the Lucknow riots three years ago. Aamir has been living a depressed and a stressful life for the past three years. His best friend Bhaskar insists him to see a psychologist. Aamir decides to consult a psychologist named Samaira who is also a friend of Bhaskar. On the other side his mother wants him to get married and settle down in life. She is unaware about his affair with Shikha. Aamir shares his past with Samaira during his counselling sessions. After spending a lot of time with Aamir, Samaira also starts feeling strongly for him. She starts leaning towards him. Samaira also try to convince him to move on before sharing her feelings with him, but Aamir stays adamant on his decision and continues his search for Shikha. Aamir’s quest for Shikha guides him to beautiful Ladakh. But could Aamir find Shikha? What exactly happened during the riots that separated the true lovers? All the answers unfold in the climax of an enchanting love story.

The Author Rihan Khalyani is an Electrical Engineer and an entrepreneur. He is a fiction writer by choice. He was born in Gandhinagar, the capital of Gujarat on 6th September 1993. Rihan inherited his writing skills from his maternal grandfather Mr. Mohammad Mankad who is a well known name in Gujarati literature. Rihan had a great flare for writing since his early age. After completing his BE in Electrical Engineering, he started a solar business which he is running successfully right now. The writer in him forced him to turn towards the creative fiction. Beside this book he is working on two other novels, one is a science fiction while the other one is a murder mystery. He has also written a short story which will be published in a popular magazine soon.