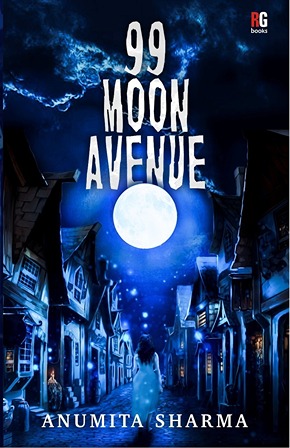 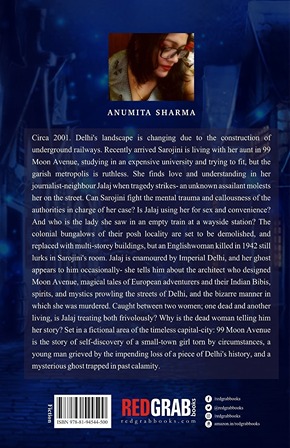 Circa 2001. Delhi’s landscape is changing due to the construction of underground railways. Recently arrived Sarojini is living with her aunt in 99 Moon Avenue, studying in an expensive university and trying to fit, but the garish metropolis is ruthless. She finds love and understanding in her journalist-neighbour Jalaj when tragedy strikes- an unknown assailant molests her on the street. Can Sarojini fight the mental trauma and callousness of the authorities in charge of her case? Is Jalaj using her for sex and convenience? And who is the lady she saw in an empty train at a wayside station? The colonial bungalows of their posh locality are set to be demolished, and replaced with multi-storey buildings, but an Englishwoman killed in 1942 still lurks in Sarojini’s room. Jalaj is enamoured by Imperial Delhi, and her ghost appears to him occasionally- she tells him about the architect who designed Moon Avenue, magical tales of European adventurers and their Indian Bibis, spirits, and mystics prowling the streets of Delhi, and the bizarre manner in which she was murdered. Caught between two women; one dead and another living, is Jalaj treating both frivolously? Why is the dead woman telling him her story? Set in a fictional area of the timeless capital-city: 99 Moon Avenue is the story of self-discovery of a small-town girl torn by circumstances, a young man grieved by the impending loss of a piece of Delhi’s history, and a mysterious ghost trapped in past calamity.

"Anumita considers herself a poet, who loves weaving fantastical stories with a whiff of crude reality. Therefore, she writes poetry in prose and prose in poetry. When she isn’t writing, she is reading, which means she does nothing besides reading or writing. She has graduated from Hansraj College, Delhi University, and done a Masters in History from Jawaharlal Nehru University. She also holds a diploma in Journalism and Communication but she’d rather not communicate with anyone if her books can do the talking. She is the author of two English novels; The Curse of Yesterday and Some Very Dignified Disclosures, and a recently published Hindi story-collection by Bharatiya Jnanpith- Kuch Aapbiti Kuch Jagbiti.
"

Be the first to review “99 Moon Avenue” Cancel reply